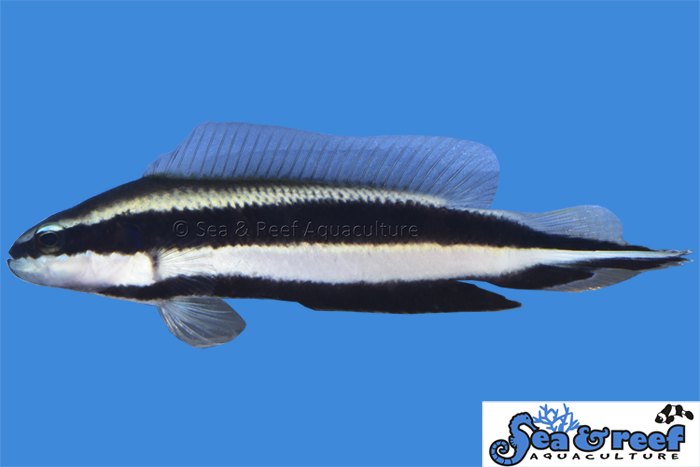 The Striped Dottyback is often called the Sankey's Dottyback and is a beautiful white and black striped fish with transparent fins. It is one of the more peaceful species in the Pseudochromis family and is reef safe. The Striped Dottyback is native to the Southern Red Sea and western Indian Ocean and limited collection from these areas makes it increasingly difficult to come by wild collected fish. Fortunately, we have included this species in our breeding program and captive bred Striped Dottybacks are readily available from Sea & Reef Aquaculture.

Striped Dottyback are native to the southern Red Sea and western Indian Ocean. They are often found on shallow reefs and prefer to hang out in the reef structure and under plate corals.

Many Dottyback species have a reputation for being feisty, but the Striped Dottyback is one of the smaller and less aggressive species. It is hardy and thrives in saltwater aquariums. Expect it to be shy at first and hide in the rockwork and crevices. However, it will quickly become bolder and spend more time in the open. It is possible to establish a pair if you select a large and a small fish. Dottybacks are protogynous hermaphrodites meaning they are born female and can change sex to males. The larger fish will typically change into a male and a pair is formed. It is the male’s job to guard the eggs and it is normal to not see him for days while he is performing this job.

Most dottybacks love meaty food items like Mysis shrimp, brine shrimp, krill, and various frozen meaty aquarium foods. However, they will also readily accept pellets and flake food. Orchid dottybacks will feast on bristle worms in your tank if they are present. It is not uncommon to see white bristle worm spines protrude from their faces. This does not seem to bother them and the spines will quickly disappear.